SONGS FOR THE SPIRIT OF MALUKU

THE AFTERWARD  SONGS FOR THE SPIRIT OF MALUKU

“You know those moments...?” begins Rígh James of The Afterward, when asked about the twist of musical fate that launched his band into existence. “You don’t just make them happen, you can’t make them happen. But when they do... it’s like falling in love”.

The story of international alternative-worldbeat band The Afterward is one of serendipity, innovation and discovery. The group arose from the ashes of Californian Ríghley James’ previous line-up, during a lengthy pilgrimage he took to Europe in search of kindred musical souls. He was carrying with him a batch of original songs based on a series of stirring tribal rhythms that were a mystery even to himself, and was on the lookout for lifelong collaborators who could help bring this material to fruition.

In Holland, in 2010, Rígh met a Dutch musician called Wil Engel, or ‘Doc’ to his friends. In Wil, Rígh found exactly the ambitious, experienced multi-instrumentalist he was looking for; and in Rígh, Wil found the ideal frontman, a performer who reminded him of both Paul Simon and U2‘s Bono. Pop/rock sensibilities, with a classic appeal. The Afterward was born.

While Wil and Rígh now had each other, what they didn’t yet have was a plan - that is until a chance encounter with a local musician changed everything. By a turn of fate, Rígh met this mysterious Lowlands-dwelling stranger who bore an uncanny resemblance to the late uke-playing spiritual giant ‘IZ’, of Hawaii. This ‘IZ’ inadvertently revealed that the music Rígh had been making was actually deeply connected to the sounds and rhythms of his own native homeland, the Islands of Maluku - also known as the Spice Islands. “He told me where he was from, in the far east of Indonesia. I had no idea where exactly it was. We talked and I said ‘I’m really curious about your culture, what about the music?’. So we went on YouTube and he showed me these groups playing the Tifas [Moluccan tribal drums]”. It was at that precise moment that Rígh’s past and future suddenly collided. “I’m listening and my jaw is on the floor. I started looking more into this music and literally every pattern and beat I encountered formed the basis of the same rhythms I had been developing for the last three years”.

It appeared that Rígh had been unwittingly channeling the ancient rhythms of a distant civilisation who, on the surface at least, he knew absolutely nothing about. The Maluku ‘Spice’ Islands are a beautiful archipelago off the coast of Western New Guinea which sit above the meeting of two tectonic plates. It’s fitting, then, that this project began after the unexpected meeting of two cultures, sparking off a journey that would go on to transcend linguistic, geographical and musical borders. It was the inception of a cultural love affair for Wil and Rígh, who immediately began to immerse themselves in sounds and stories of the Maluku Islands. They went to the homes of Moluccan families in Europe and North America and performed live house concerts, one-on-one. They learned traditional tales of the islands of Maluku, first hand, from the people themselves. They even tracked down some of the oldest living Moluccans and won their blessing to adopt the themes, rhythms and sounds of their people.

“Traditionally you ask the father’s hand in marriage,” explains Rígh. “The Moluccans have a culture of honour, so we went to elders and master musicians and asked them, ‘Can we do this?’. They gave us their blessing and asked us ‘What do you need?’”. From there, The Afterward spent two years learning how to play traditional Moluccan instruments from the people themselves. They developed a keen understanding of the Moluccan Tifas, Totobuangs (multi-gong, Kulintang-like instruments) and Tahuris (giant conch shells from the Banda, Ceram, Halmahera and Molucca seas that surround the Maluku Islands). In the process Wil even invented a new technique for bass guitar, the Bass Slide Tremolo, which emulates the Tahuri and the indigenous Australian Didgeridoo.

Wil and Rígh were developing a sound which essentially took modern pop/rock and married it with the sonic and rhythmic traditions of an ancient culture, calling to mind the crossover appeal of other young artists such as Gotye, Lord Huron and Vampire Weekend. Soon, the seed of an album began to emerge. It was an album that would feature multilingual singing and storytelling, spanning English, Spanish, Alune, Indonesian and Old Ambon Malay. An album that would showcase an entirely new sound. They called it "Songs for the Spirit of Maluku," and braced themselves to unleash it upon a public who they were well aware might not be ready for this bold musical adventure. As Rígh puts it: “I just happened to be the first American voice writing in the Western pop/rock tradition to make a full-length worldbeat album dedicated entirely to the sounds and folklore of Maluku”.

As it turns out, The Afterward could never have predicted how successfully their eleven-track LP would resonate with the public. Following its release in May 2013, Songs for the Spirit of Maluku reached the iTunes #1 World Album spot in The Netherlands and the iTunes #2 World Album spot in Indonesia, amassing the band over 100,000 Facebook fans in under two months (a figure now over 500,000, and growing daily). The duo’s lofty ambitions, it seems, are coming to light. “We want to create and perform global music for a global audience,’ says Rígh. “Popular music that is memorable and innovative at the same time and that can be appreciated for years to come”.

And “global music for a global audience” it certainly is. Atmospheric album opener ‘The Ocean Rises’ is told entirely in the traditional Alune tongue, brooding with heart-tugging vocal harmonies and the insistent rumble of the Tifa drums. ‘Ole Sioh II’, an exquisite ode-march rowing to the endless churn of island life, ebbs and flows like waves lapping at a shore, while ‘Island Halo Wedding’ tells the touching story of a Moluccan matrimony over gently strummed ukelele and rolling, hypnotic rhythms. The songs have proved incredibly popular with fans across the world, and although most Western listeners at first have no idea what the words “Ole Sioh” or “Bulan Pakai Payung” mean, they nevertheless find themselves compelled to sing along.

Unsurprisingly, the nature of the Maluku project has invited comparisons to Paul Simon’s chart-topping album Graceland, which emerged out of from Simon’s inspirational journey through South Africa and was touted as a Zulu-Western pop crossover. Yet Simon isn’t the only classic artist reflected in their work: “We’re inspired by many masters spanning a wide gamut of musical backgrounds, from Philip Glass to Phil Collins, Peter Gabriel to Gabriel Yared, from Gordon Lightfoot to Gordon Sumner (Sting), from Brian Wilson to Brian Eno. And, if you listen real closely, you can actually hear all of these influences and many more on the album”.

So what happens next? Well, The Afterward’s affinity with the Maluku Islands continues to thrive and develop, and has now grown organically into an ongoing social cause referred to simply as ‘Spirit of Maluku’. Earlier this year, The Afterward led a recording session at the legendary Abbey Road Studios in London with a host of international musicians and singers, in the process creating the ‘Spirit of Maluku’ London community choir. In total the performers in attendance spanned twenty-four separate nationalities. Also joining them that day was British actor, musician and comedian Bill Bailey, who it turns out has been nurturing his very own obsession with Maluku. “He’s actually been to the Spice Islands,” explains Rígh. “He married his wife on Banda. I had no clue. He was so into the project”.

The single that came out of the Abbey Road sessions is the triumphant and explosive ‘One Rhythm’, described by the band as “a world-pop march to inspire folks everywhere to sing, move and be united in one rhythm”. The song is currently due for release in 2015, and all the signs suggest that The Afterward will continue to make waves with their Trans-Pacific world-pop. “It’s amazing, because it’s something that appears new, something that most people haven’t heard before,” says Rígh. “But instead of people being like ‘Oh, this is so new, I can’t relate to this,’ people have been like, ‘I’ve been waiting for something like this’”.

“It’s not Moluccan, but it’s also not American or Dutch or English. It’s a mix, a new living organism that has its own soul.” 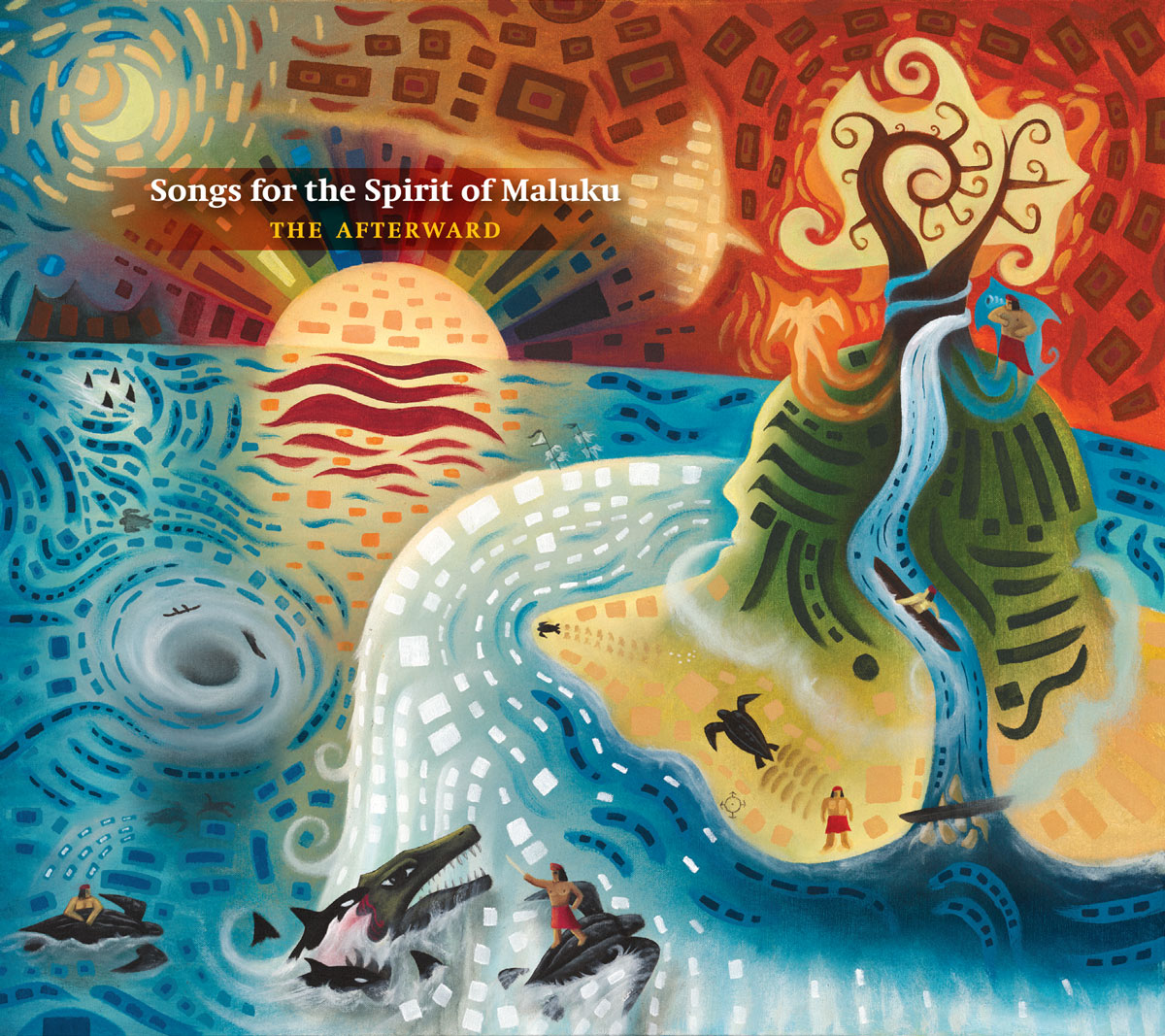 Get involved with Songs for the Spirit Of Maluku. Digital album available now from iTunes - also on GooglePlay, Amazon & more!

Connect with The Afterward at
www.facebook.com/theafterward